The Current Economic Downturn and PSRS

Reprinted by permission from the
Missouri National Education Association newsletter Summer 2009
where it had the title "Your retirement - How safe is it?"

There hasn’t been an event that has created more questions and concern than the current economic downturn. As you might expect, since this downturn began the Public School Retirement System of Missouri (PSRS) has fielded numerous questions from members, retirees, taxpayers and others concerning the possible effects of the market decline on the System. 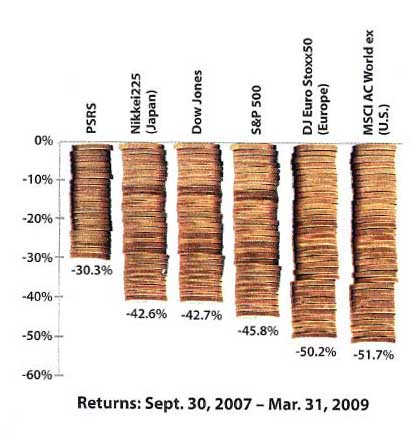 Economic Downturn
Since the U.S. stock market began declining in October 2007, the decline has rivaled a similar period -- the Great Depression. From October 2007 through March 2009, the U.S. stock market has declined 45.8 percent, while Europe has seen a 50.2 percent decline and Japan a 42.6 percent decline. It has truly been a worldwide economic slowdown with few places to hide.

PSRS, utilizing a professionally managed investment program and a well-diversified portfolio, fared significantly better over the same time period declining 30.3 percent. While the System has outperformed most markets and the majority of similar institutional investors, we have still experienced a substantial decline in asset values over this difficult period. This decline does not impact our ability to provide the benefits promised, but it will have an effect on the funded status of the plan and future contribution rates.

Fortunately, PSRS entered this downturn in good financial condition with a strong prefunded ratio of over 83 percent. Also, as the largest institutional investor in the State of Missouri, and one of the largest in the nation, the System has seen the ebbs and flows of investment markets and has positioned itself as a long-term investor. However, investment declines of this magnitude ultimately have an effect.

Assets and Liabilities Annually Reviewed
Each fiscal year (July 1-June 30), the PSRS actuaries compare the assets and liabilities of the System to determine the funded status and contributions necessary for the future. With each year of service earned by Missouri’s educators, the promises (i.e. liabilities) of the plan increase, as hopefully do the assets. When measured over time, this comparison of assets and liabilities results in the prefunded ratio. As of June 30, 2008, PSRS was 83.4 percent prefunded. Stated another way, PSRS had over 83 cents of each dollar of future benefit promises made to Missouri’s educators -- a very healthy position.

As complicated as a fund like PSRS can be, there are really only three “levers” that affect the funding levels of a defined benefit retirement plan like PSRS:

Benefit Promises
Unlike a Defined Contribution (DC) plan (e.g. 401k, 403b) which provides benefits based on account balances, PSRS is a “Defined Benefit” (DB) retirement plan and provides benefits based on a formula using a member’s final average salary and years of service. These benefit promises for PSRS members are made by the Missouri General Assembly and codified in state statute. The benefit provisions of PSRS such as retirement ages, eligibility, benefit levels and cost-of-living adjustments are all established and controlled by state law. The PSRS Board of Trustees and staff do not set these benefits but instead administer them. Any reduction in benefit levels or promises would have to be passed by the Missouri legislature and signed into law by the Governor. Unlike many other states, there have been no bills introduced or any pending before the Missouri General Assembly to make any benefit cuts.

Article I, Section 13 of the Missouri Constitution and the attendant case law makes the argument that the relationship between PSRS and the members of the plan is contractual in nature and the benefits may not be diminished or impaired. While changes in benefits and plan design cannot be completely ruled out in the future, this Constitutional provision makes it difficult.

Investment Earnings
This is the most important lever of the three because investment income accounts for almost 2/3 of the revenue needed to fund the retirement benefits for Missouri’s educators. The remaining 1/3 is split almost evenly between member and school district contributions. Our actuaries, to establish contribution rates needed to adequately fund those benefit promises, must make assumptions about how much money we expect to earn on our investments in the future. As with most similar retirement funds, PSRS’ return assumption has been 8 percent for many years. In years when the System exceeds the 8 percent return, actuarial gains are incurred and the funded status improves. Conversely, in periods like this when the 8 percent assumption is not met, the actuarial losses result in a decline of the funded status.

In order to lessen the volatility in liabilities and contribution rates, PSRS actuaries use a five-year smoothing period to value gains and losses in the investment portfolio for funding purposes. Still, with historically low investment returns in 2008 and that trend continuing in 2009, these declines will ultimately be considered by the actuaries in the funding and establishment of future contribution rates for members and school districts.

The actuaries must make numerous assumptions about demographics, life expectancies, retirement patterns, and most importantly, future investment returns, to determine the contribution rates needed to adequately fund the plan in the future. 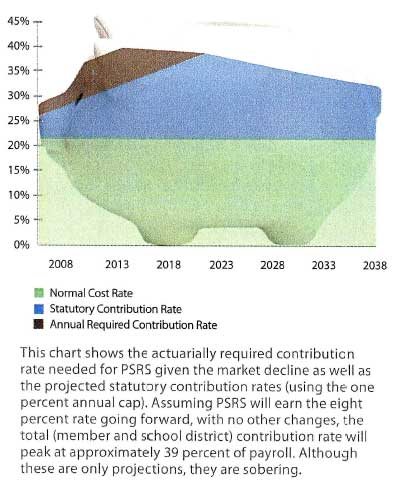 Projection of Future Contribution Rates
Because the investment returns have such a powerful effect on the funded status and contribution rates, it is difficult to project them far into the future with a high degree of accuracy. However, we have asked the actuaries to project the estimated future contribution rates needed for PSRS using the following parameters:

Future
The PSRS Board of Trustees is collaborating with MNEA and other Missouri educational associations to ensure all parties are informed and educated about the market conditions and how they affect the System. Together we are working to identify financial solutions to safeguard the stability of the System. So what does this all mean?

The PSRS Board of Trustees and staff are working to ensure that future generations of Missouri’s teachers and support staff will inherit a retirement system as strong and reliable as the one we have today.


Guest authors are welcome to submit articles and their thoughts to the ROEDER RAMBLE for potential viewing on this site.